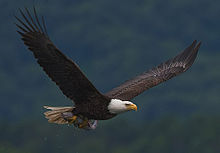 I want to talk about Ralph Waldo Emerson’s famous 1836 essay, “Nature,” and why one of its central ideas is dead wrong, but first I’m going to tell a true story about a bald eagle. The two thoughts are related.

A long time ago when I was still in school, I was at a religious retreat when someone from the church brought a live bald eagle for us to look at. As I recall, this person volunteered at some wildlife rescue organization. The eagle had been injured and was no longer able to fly. This was back before the bald eagle population had recovered from the effects of DDT. This was only the second one I had seen; I wouldn’t see one in the wild for another decade. The bird was wary but not agitated, and we all kept a respectful distance.

I remember that it was obvious to me at the time that the man had no particular reason to show us this bird. It was just something he wanted to do. But we were at a church retreat, and a pretty conservative church at that, and so after telling us about the species, he made several analogies to spiritual subjects and basically wrapped the whole thing into a Sunday School lesson. He probably even quoted the “They will soar on wings like eagles” verse from Isaiah.

He ended his talk this way, I think, out of some sense of moral or spiritual obligation. The eagle wasn’t allowed simply to be a wonderful being in and of itself. To be truly worthwhile it had to represent something higher, something abstract. Even at the time, that bothered me. END_OF_DOCUMENT_TOKEN_TO_BE_REPLACED

…And he doesn’t even talk especially fast.

One of the helpful things about history is the way it gives us perspective on our own lives. Issues that we think are new or unique to our day have usually appeared before in some form or other. History helps us see the large trends rather than getting lost in the day-to-day details of current events.

“Big History” takes this even further. As David Christian’s talk demonstrates, the idea of Big History is to step way back and look at the broad scope of events in terms of various time scales… including the largest time scale of all. Not only is it a great way to induce awe, but it will also change and deepen the way you look at not only current events, but history itself. END_OF_DOCUMENT_TOKEN_TO_BE_REPLACED

“The time will come when diligent research over long periods will bring to light things which now lie hidden. A single lifetime, even though entirely devoted to the sky, would not be enough for the investigation of so vast a subject . . . And so this knowledge will be unfolded only through long successive ages. There will come a time when our descendants will be amazed that we did not know things that are so plain to them . . . Many discoveries are reserved for ages still to come, when memory of us will have been effaced. Our universe is a sorry little affair unless it has in it something for every age to investigate . . . Nature does not reveal her mysteries once and for all.”

I love this quote. To me there’s a thrill in reading words from so long ago from a person who could look beyond his own time and comprehend something about the nature of knowledge and cumulative curiosity. His statement is as true and timely today as it was two thousand years ago.

We all grew up with pictures like this — unbelievably huge dinosaurs with impossibly long necks. For a kid, a big part of the attractiveness of dinosaurs is their sheer bigness. Not all dinosaurs were large, of course, but from a kid’s perspective, the bigger and weirder the better.

One thing I never considered is how the biology actually works at that size. There’s a problem of scale. If you’re trying to pump blood from a heart up the fifty-foot neck of a Supersaurus, wouldn’t you have to have a massive heart, incredibly high blood pressure, or maybe some sort of auxiliary pumping mechanism to make it work?

Turns out, paleontologists have a lot to say about this. It’s a mystery they haven’t quite unraveled yet. A few months ago Brian Switek posted a fascinating article about this at his “Laelaps” blog at National Geographic. I’ve been meaning to post about it ever since. END_OF_DOCUMENT_TOKEN_TO_BE_REPLACED Last time I told you a little about the book Mistakes Were Made (but not by me) by Carol Tavris and Elliot Aronson, a fascinating and easy-to- read book about the clever ways we all justify “foolish beliefs, bad decisions, and hurtful acts.”

Here is a very useful illustration of what they’re talking about. On p. 32 they ask you to imagine two students who are tempted to cheat on a crucial test. Both have moderate attitudes toward cheating and are otherwise similar. One cheats and one doesn’t. One sacrifices a good grade; the other sacrifices integrity. “Their decisions are a hair’s breadth apart; it could easily have gone the other way for each of them.”

How will they feel about cheating a week later? The authors predict that the cheater will minimize its seriousness, while the one who resisted temptation will now hold a harsher, more punitive attitude toward cheating.

Here’s where it gets interesting: END_OF_DOCUMENT_TOKEN_TO_BE_REPLACED

Last time I promised to write about Mistakes Were Made (but not by me): Why We Justify Foolish Beliefs, Bad Decisions, and Hurtful Acts, by Carol Tavris and Elliot Aronson (2007). I know people say this sort of thing a lot when they’re enthused about a book, but if I could make it required reading… you would all be very unhappy with me (but only until you read the book).

Though the book mostly isn’t about politics, the title come from a phrase we’ve all heard time and again from political leaders whenever they’re backed into a corner and have to admit that things have gone badly wrong. They trot out the passive voice: mistakes were made. Made by whom? They don’t say. They’ll do anything to evade responsibility and justify their own behavior.

But it isn’t just politicians. This book’s thesis, stated on p. 2, is that “Most people, when directly confronted with proof that they are wrong, do not change their point of view or course of action but justify it even more tenaciously.” END_OF_DOCUMENT_TOKEN_TO_BE_REPLACED

“We are all capable of believing things which we know to be untrue, and then, when we are finally proved wrong, impudently twisting the facts so as to show that we were right. Intellectually, it is possible to carry on this process for an indefinite time: the only check on it is that sooner or later a false belief bumps up against solid reality, usually on a battlefield.”

When he makes a mistake, he realizes it.

Having realized it, he admits it.

Having admitted it, he corrects it.

He considers those who point out his faults as his most benevolent teachers.”

A blog about curiosity, discovery, and creativity by David Bristow.